It seems slightly strange to be writing a post about a conference that I didn’t physically attend but the awesomeness that is TestBash, made me feel like I was part of it anyway!!

Testbash has been part of my own personal journey for a number of years now, It was the very first testing conference that I attended back in 2013 and I was hooked! I’ve helped out Rosie at a couple of the events and I have also been an attendee at a couple too, both of which were wonderful and rewarding experiences. When I heard the announcement for TestBash Manchester, I was instantly thinking, I’m going to that event!! I bought my ticket (not before Chris Chant…because no one does…) and was looking forward to seeing the talks, familiar faces, meeting new people and of course learning loads – but I also had something else very important going on this year. My wife and I were expecting our first child so, I had a dilemma and a choice to make. I made the decision, the only one I was ever going to make, to stay at home with Sophie and my Wife.

As a huge fan of Testbash, I wanted to ensure that someone else would be going in my place – It would have been easy to get the money back but I wasn’t really interested in that and I wanted to pay it forward. I’ve sponsored a ticket in the past so this is not a new thing for me and I wanted to do it again. I met Patrick Prill for the first time, in person, at TestBash in Brighton after talking to him on Twitter for several months. This guy is awesome, not as moody as his profile/any other picture suggests and I couldn’t think of a better person to gift the ticket too.

Making me feel part of the day…

I was up early on the day of the event, I normally am anyway since the arrival of our little lady. So there I was, feeding Sophie and a flood of messages came rolling in from Twitter!

*UPDATE* – Can’t believe I missed this photo of Patrick (semi-smiling) and Rosie!! 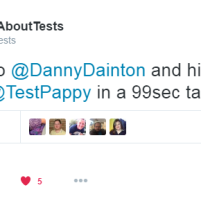 Patrick had attached a sticker to himself, with my name on, and was having photos taken with lots of lovely people. It made me feel really happy and part of the conference! This is what I love about the test community, you get moments like this that make you feel valued and part of something special. Throughout the day I was getting notifications about different things that were happening and finally, I received a mention/shout out during Patrick’s 99 second talk! It perfectly rounded the day off for me. Thank you!!

From a non-attendees viewpoint…

I’m completely bias, so I’m always going to think that TestBash is awesome, no matter where it’s held! There was something different about this one and I can’t quite put my finger on why. Richard Bradshaw has a huge part in this I feel, along with Rosie, they made TestBash Manchester very special. The social media buzz was amazing to see, maybe because I’ve found myself on the outside looking in this time – Everyone looked and sounded like they were having a really great time!!

One of the things that I felt was a master stroke was “The Teshbash Challenge”. It was an absolutely perfect way to get everyone talking to each other and a fantastic ice breaker. I love talking to other people and I don’t really mind walking up to strangers and having a chat, others are not so comfortable doing this but by having this challenge open as part of the event, it meant that it would be far easier to talk to other people during the day. 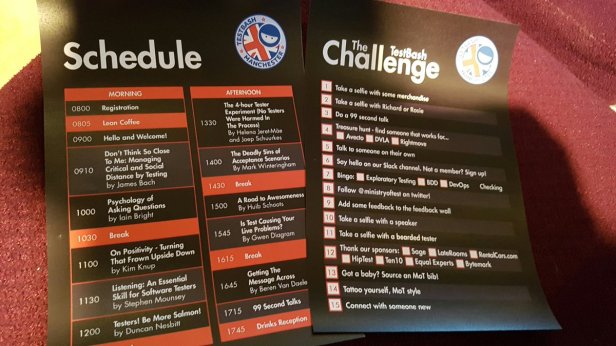 All is not lost…

Although I missed the event itself, as a Pro Member of the Ministry of Testing Dojo I get to watch the talks back in my own time when they get uploaded to the site. I don’t think I’ll go as far as trying to hold my own TinyTestbash Bristol in my house but I will enjoy all the talks over the up-coming weeks.

If you’re not a member of the Dojo already, I would thoroughly recommend signing up to it. Not only does it have all the previous TestBash talks it’s also home to lots more great content and is getting added to all the time!! Go check it out!!

I’ve already sent out a pre-advance warning to my Wife so I’ll be at the next UK based Testbash event in Brighton next year – Hopefully, I’ll see many of you there!!

Good Luck to everyone involved in TestBash Philadelphia and TestBash Netherlands – I know that those will be equally as awesome!!

2 thoughts on “I kinda didn’t go to TestBash…”